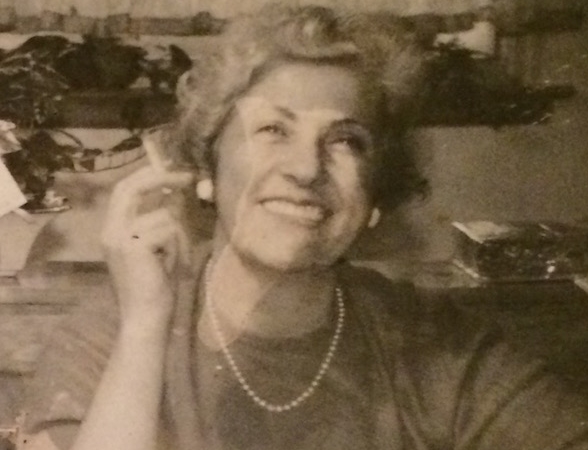 This one huge exception made a big impression on my mom. She told me the story often enough that I can almost picture the striking dark-haired widow at the jewelry counter at Hudson’s department store in Detroit, buying herself a diamond ring because she’d decided, possibly just this one time, that she was worth it. My mom liked to play up the feminist angle of her mom’s unusual purchase. After entering an arranged marriage at 14 and being widowed in her mid-30s, Susan had no lack of suitors but decided she wouldn’t wed again. She had a good head for business and was confident she could support her family (my mom was 12 when her dad died; her brother was 19). Susan didn’t need a man to buy her a diamond ring; she could do that herself, too.

Anyway, I wore the ring to work because of a decision I’ve made since starting my Shopping for Happiness project. It’s pretty simple: I’m not hoarding my good things anymore. My best jewelry? I’m wearing it, even if I’m not going somewhere special. That expensive skin cream I was saving? I’m using it, everyday. I’ve taken the pretty green china plates that belonged to my husband’s grandmother out of the basement, where they were carefully wrapped in layers of newspaper, and put them in my cupboard.

I’m no longer saving my “good” stuff for later, because it’s increasingly clear to me that we only get one life and I’m already hip-deep in that one. There really isn’t a “later.”

Also, spending money on myself for a few months has made me feel more abundant — and much less desperate to hang on to things. I’ve developed a new confidence in myself. I can go ahead and slather on those luxury beauty products, wear that delicate sweater, use that china plate, even wear my grandmother’s ring to work — because if the worst happens, I’m sure I’ll be able to handle it. It’s pretty hilarious once you start thinking about it — what’s “the worst,” anyway? In most cases it’s something incredibly survivable, like getting by with one less dish after the “good” one breaks, or the need to buy a cheaper drugstore brand when the fancy stuff runs out.